The contents of this page have been produced by a team of physicians and experts of the Italian Institute of Telemedicine in compliance with the recommendations of the latest medical and scientific guidelines. Institutional communication not subject to authorisation pursuant to the Ministerial Decree 23/02/2006.

What are sleep apneas? 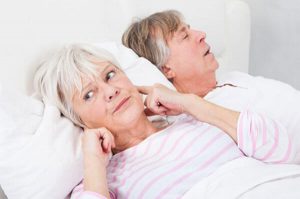 Obstructive sleep apnea is a condition characterized by repetitive and recurrent pauses in breathing (notably apneas) during the night sleep, lasting at least 10 seconds, accompanied by the reduction of the content of oxygen in the blood (desaturation).

Obstructive sleep apnea by itself is not a disease and is often considered a phenomenon not particularly dangerous and rather common. However, when sleep apneas become frequent and a significant desaturation of the blood is observed, with the arising of diurnal symptoms (usually somnolence), we speak of a true Obstructive Sleep Apnea Syndrome (OSAS).

OSAS affects up to 6% of the population and is twice as frequent in males than in females, particularly in old age (peak between 55 and 60 years). OSAS, if left untreated, evolves in a pejorative sense and can cause hypertension and severe cardiovascular diseases (myocardial infarction, cardiac arrhythmias, heart failure and stroke).

The causes of sleep apneas: snoring

Sleep apneas are caused by airway obstruction due to relaxation of the body during sleep: in this phase the palate tends to collapse and cause the typical snoring.

There are special conditions that predispose to frequent sleep apneas that then flow into OSAS.

How to diagnose the sleep apneas? 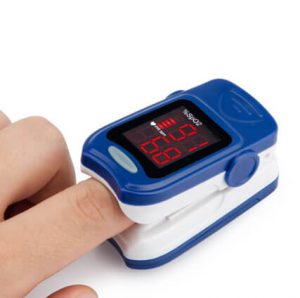 Unfortunately, OSAS may be present for years but not recognized. Although a diagnosis of OSAS is more appropriately performed through a complex examination, called polysomnography, in a hospital environment and in a specialized contest, there are currently alternatives for a quick screening in the community, without long waiting lists.

The simplest test is the oximetry, or pulse oximetry, a method for the direct, non-invasive and continuous measurement of the percentage of oxygen saturation of the circulating arterial blood haemoglobin, by means of a device called oximeter or pulse oximeter. The most common type of pulse oximeter consists of a “gripper” or “thimble” sensor applied to the fingertip that detects the oxygen percentage bound to the blood haemoglobin circulating through the finger.

The pulse oximetry provides indirect information on the oxygenation status of the blood and is generally used to evaluate the efficiency of respiratory ventilation. What is measured is the amount of oxygen bound to the circulating haemoglobin, expressed as a percentage (also called SpO2 or percentage saturation of oxygen in the blood).

In case of normal blood oxygenation,SpO2 varies between 96 and 98%, while it falls below these values ​​if the lungs do not adequately oxygenate the blood.

For the diagnosis of OSAS, a prolonged pulse oximetry is usually performed during night sleep. In the presence of a significant number of desaturation episodes (at least 5 episodes per hour in which SpO2 drops by at least 4% for at least 10 sec) it is possible to make an OSAS diagnosis. 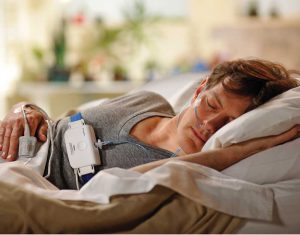 A more thorough test is represented by the cardiorespiratory polysomnography (also called polygraphy), which is performed using a simple portable device able to record the air flow and snoring at the nasal level, thoracic respiratory efforts and the blood saturation from the finger (pulse oximetry) during the physiological nocturnal sleep. This device is able to more accurately recognize the characteristics and the frequency of apnea episodes during the night sleep and to associate them with possible daytime sleepiness.

When can we suspect of suffering from OSAS?

How to correctly measure the blood oxygen percentage saturation (Sp02)

WHAT CAN THOLOMEUS® DO FOR YOU

The amount of oxygen present in the blood is a fundamental indicator for the possible arising of sleep apneas. By using validated oximeters, Tholomeus® supports your measurement of the oxygen saturation in the blood thanks to our Teleoximetry service. Tholomeus® also makes available a professional Telepolysomnography service for monitoring cardiorespiratory activity during night sleep, in order to asses sleep apneas.

All uploaded data can be viewed in AppTholomeus®

after signing in for free to Tholomeus®

Check your parameters with our products, specifically developed for Telemedicine!

Constantly monitor your physiological parameters by means of validated and certified products, reliable and suitable for our Telemedicine service. 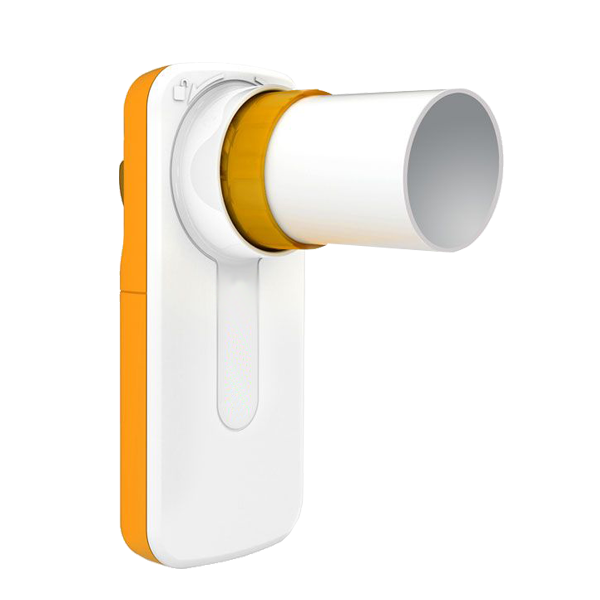 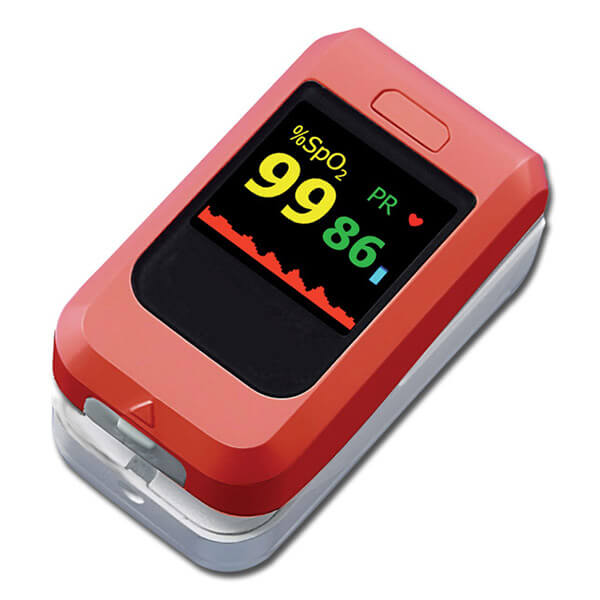 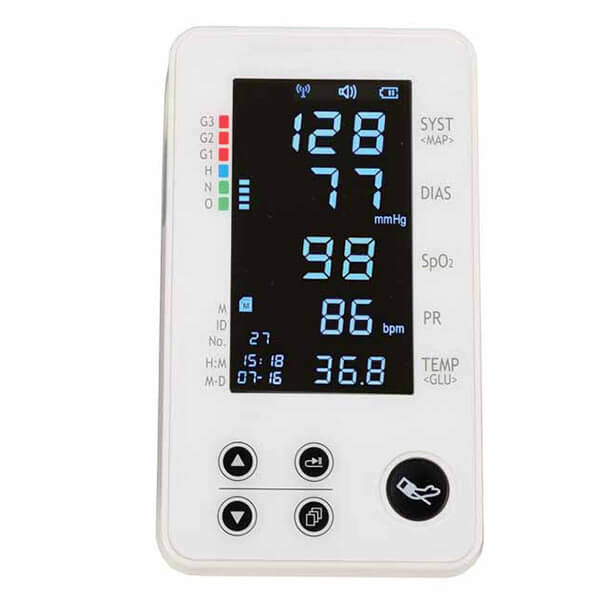 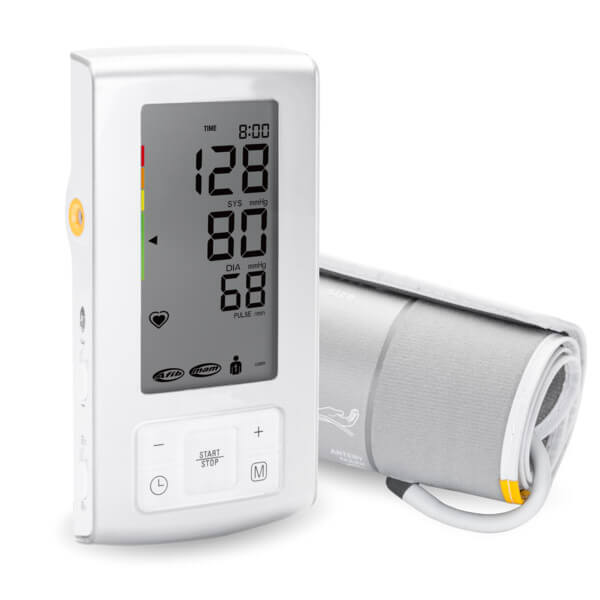 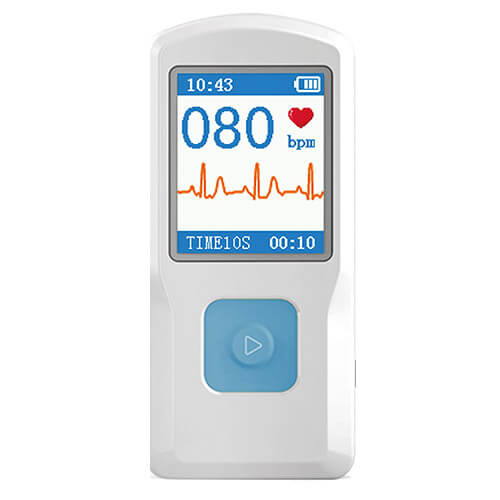 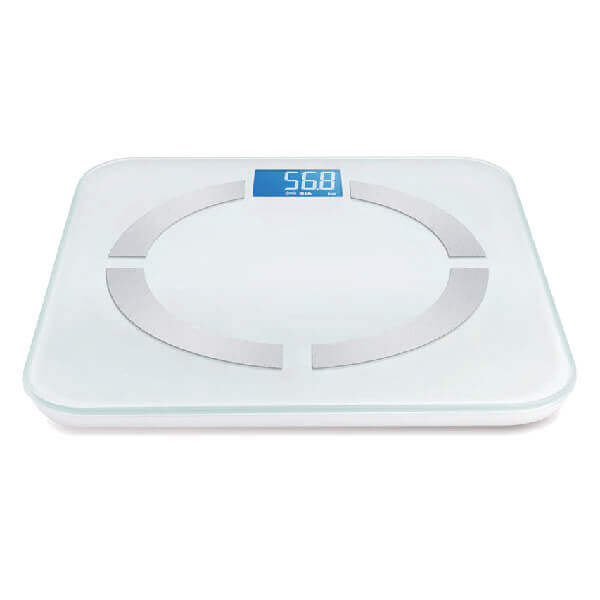 In compliance with the guidelines of the Ministry of Health dated March, 28th, 2013 on advertising to the general public, Biotechmed declares that all information contained in this site and concerning medical devices are exclusively for branch professional operators and have no advertising nature. 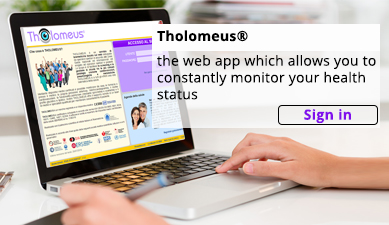 © 2019 Copyright by Biotechmed – All rights reserved- VAT Id. Nr. 03153980127
Utilizziamo i cookie per essere sicuri che tu possa avere la migliore esperienza sul nostro sito. Se continui ad utilizzare questo sito noi assumiamo che tu ne sia felice. Cliccando su "Accetta tutti", acconsenti all'uso di TUTTI i cookie. Tuttavia, puoi cliccare su "Rifiuta" per rifiutare i cookie o puoi visitare "Impostazione Cookie" per fornire un consenso controllato. We use cookies on our website to give you the most relevant experience by remembering your preferences and repeat visits. By clicking “Accept All”, you consent to the use of ALL the cookies. However, you can click "Reject" to reject the cookies or you may visit "Cookie Settings" to provide a controlled consent.
Impostazione dei cookie - Cookie settingsRifuta tutti - Reject allAccetta tutti - Accept all
Manage consent

This website uses cookies to improve your experience while you navigate through the website. Out of these, the cookies that are categorized as necessary are stored on your browser as they are essential for the working of basic functionalities of the website. We also use third-party cookies that help us analyze and understand how you use this website. These cookies will be stored in your browser only with your consent. You also have the option to opt-out of these cookies. But opting out of some of these cookies may affect your browsing experience.
Necessary Always Enabled
Necessary cookies are absolutely essential for the website to function properly. These cookies ensure basic functionalities and security features of the website, anonymously.
Functional
Functional cookies help to perform certain functionalities like sharing the content of the website on social media platforms, collect feedbacks, and other third-party features.
Performance
Performance cookies are used to understand and analyze the key performance indexes of the website which helps in delivering a better user experience for the visitors.
Analytics
Analytical cookies are used to understand how visitors interact with the website. These cookies help provide information on metrics the number of visitors, bounce rate, traffic source, etc.
Advertisement
Advertisement cookies are used to provide visitors with relevant ads and marketing campaigns. These cookies track visitors across websites and collect information to provide customized ads.
Others
Other uncategorized cookies are those that are being analyzed and have not been classified into a category as yet.
SAVE & ACCEPT
Powered by